Why Olive Oil is Good for Your Bones

Thanks to a pervasive advertising campaign involving milk mustaches, most of us grew up convinced that milk is essential for building strong bones.  But it's time to bust that myth when it comes to your postmenopausal bone health with olive oil.

According to a new study involving olive oil maybe we should be sporting greasy green-gold mustaches instead.

Published in the Endocrine Society's Journal of Clinical Endocrinology and Metabolism [i] the two year study from Spain shows that eating a Mediterranean diet enriched with virgin olive oil is associated with increased serum osteocalcin concentrations.

Osteocalcin is a protein secreted by osteoblasts, the body's bone-building cells. Levels of osteocalcin in the blood are often used as a marker for bone formation. The higher levels found in this study suggest that olive oil may have a protective effect on postmenopausal bone health.

Countries where dietary consumption of dairy products is greatest have been shown to have the highest rates of osteoporosis and bone fractures. That includes the U.S. and European countries.

In fact, women who drink two or more glasses of milk per day have a 50% greater risk of a hip fracture than those who drink one glass or less.

However studies have shown that osteoporosis rates within Europe are lower in the Mediterranean basin.  Many researchers have speculated that the native diet could make the difference.

The traditional Mediterranean diet is rich in fruits and vegetables, including olives and olive oil.

The Spanish researchers noted that olive oil had already been associated with osteoporosis prevention in laboratory experiments. The study authors believe that theirs is the first randomized study demonstrating that olive oil preserves bone in humans, as measured by the circulating amounts of osteocalcin.  That could be important for postmenopausal bone health.

The study followed 127 men aged 55 to 80 years old for at least two years.  It was done as part of the PREDIMED study, a large, parallel group, randomized, controlled trial attempting to assess the effect of the Mediterranean diet on the prevention of cardiovascular diseases.

Only the Mediterranean diet supplemented with olive oil was found to be associated with a significant increase in total circulating osteocalcin and other bone formation markers.

In addition, participants following the other two diets were found to have lower serum calcium levels whereas those eating the olive oil had no significant changes to their calcium levels.

Olive oil: it does a body good for bone health.

But make sure you get the good stuff.  Your olive oil could be a fraud.

Using the best olive oil makes a big difference in getting all the menopause and bone health benefits from this superfood.

You probably know by now that olive oil is the magic ingredient in the Mediterranean diet.  It helps lower your risk of heart attack and stroke.  In fact, olive oil turns off the genes that turn on heart disease and inflammation.  Olive oil even protects your bones after menopause.

But does the bottle in your cupboard contain the best olive oil for your health?

For years the olive oil industry has been embroiled in controversy surrounding the purity of extra-virgin olive oil.

Instead of protecting you from disease, adulterated olive oil may be adding to your health woes.

What Does Extra-Virgin Mean?

The term "extra-virgin olive oil"(EVOO) is legally regulated.  It means the oil has been made from mechanically crushed olives.  It can't be refined in any way by chemical solvents or high heat.  It has to pass a chemical test.  But it also has to pass the smell and taste test by experts.

There was no such thing as "EVOO" before the 1960s.  It had to be invented when stainless steel milling technology allowed for the production of different grades of olive oil.

But the new milling process is very expensive. That leads lots of producers to take shortcuts.  Some blend EVOO with lower grade vegetable oils.

Your Supermarket EVOO is Probably NOT Extra-Virgin

When the Olive Center at the University of California at Davis tested extra-virgin olive oils on supermarket shelves, they found 69% didn't pass the smell test and 31% were oxidized or had poor chemical quality.

They also tested 15 samples of EVOO from restaurant suppliers.  They found 60% failed to qualify as extra-virgin.  One even contained canola oil.

Why does getting the best olive oil matter? Quality counts when it comes to olive oil's health benefits.  Olive oil goes rancid quickly and loses its antioxidant and anti-inflammatory properties.  Bad olive oil actually adds to your body's burden of free radicals and impurities.

Whose extra-virgin olive oil can you trust?

Pompeian is the second largest olive oil bottler in the U.S. and the only one that has undertaken to voluntarily comply with the USDA's olive oil quality standards [ii]. It has earned both USDA and NAOOA quality seals.

But as with wine, olive quality can vary season to season.  Just a few years ago 33% of 45 samples from the same three brands failed to meet chemical standards and 84% failed to meet taste and smell standards when tested by UC Davis's Olive Center.

One problem is that most bottlers don't own olive groves.  They buy from middlemen who may buy from other middlemen making quality control a challenge.

And your "Italian" olive oil probably isn't.  It's estimated that 40% of bottles labeled "Italian" originated in other countries like Spain, Greece, or Tunisia.  It's just that Italy is the largest importer of olive oil and bottles the oil for resale.  But the label should disclose the origin of the olives used.

How To Find The Best Olive Oil

Here's how to make sure you're getting the best olive oil for your money:

Please let me know how I can better serve you and your bones.

Kindly take a moment to tell me more.
My gift for your time is a simple alkalizing salad/veggie recipe video waiting just for you.

You can tell me more HERE.

From my bones to yours!

Margie King is a graduate of the Institute for Integrative Nutrition®. A Wharton M.B.A. and corporate attorney for 20 years, she left the world of business to pursue her passion for all things nutritious. Margie is the author of Nourishing Menopause: The Whole Food Guide to Balancing Your Hormones Naturally. She is also a professional copywriter and natural health, beauty and nutrition writer. You can find Margie King's book Nourishing Menopause HERE

JOIN MY BONES COMMUNITY AND RECEIVE: 5 BONE-LOVING RECIPES
You'll also receive monthly Bone Health Blogs and promotions. You can unsubscribe at any time. From my bones to yours,
Irma Jennings, INHC
Your Holistic Bone Coach
[email protected] 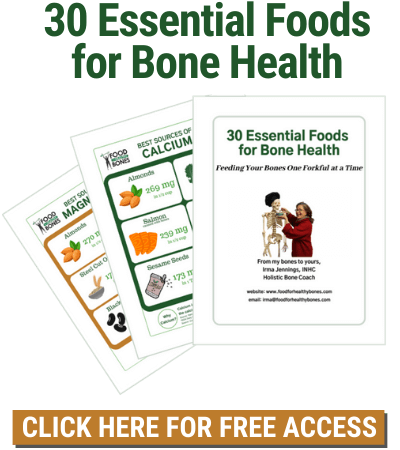